Can Indonesia relocate its capital without derailing its Paris Agreement targets? 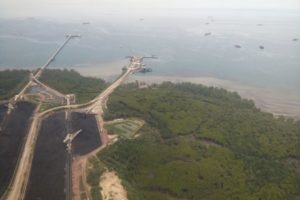 Amid severe traffic congestion, worsening air pollution, rapid land subsidence and other serious issues, Indonesia’s capital city, the heart of its economy and government, seems no longer able to sustain the lives of more than 10 million people.

President Joko Widodo recently echoed again the idea of relocating Indonesia’s capital, an endeavour that could cost US$33 billion. The aim: To ease the strain on Jakarta but also to shift the country’s development away from being too Java-centric. There are currently 140 million people, or around 57 per cent of the total population, living on Java.

East Kalimantan—between North Penajam Paser and Kutai Kartanegara—is the strongest contender due to several reasons. It is in the centre of Indonesia and, being located outside the Ring of Fire, is not disaster-prone. It already has the basic infrastructure.

While many consider Kalimantan to be a perfect fit for a new capital, doubt looms over the environmental impact of the decision: Will the relocation move Indonesia further away from its emission reduction targets under the Paris Agreement?

In line with global efforts to limit warming to 2°C or below by the end of the century, Indonesia submitted its nationally determined contribution (NDC) in November 2016. By 2030, it aims to reduce emissions by 29 per cent (unconditional target) or 41 per cent (conditional target) compared to the business-as-usual (BAU) levels. This translates to a greenhouse gas emissions target of 2.03GtCO2eq (unconditional) or 1.7GtCO2eq (conditional), from the business-as-usual projection of 2.87GtCO2eq.

How could moving its capital derail Indonesia’s NDC targets?

According to the Low Carbon Development Indonesia report released by the Ministry of National Development Planning (Bappenas) earlier this year, Indonesia’s carbon emissions in 2017 was 2.49 GtCO2eq. To achieve its conditional NDC target, carbon and energy intensity must fall at a rate of 8.42 per cent per year through 2030. This is not an easy feat to pull off, even at the current rate of emissions. It does not consider the need to open up more land to close the infrastructure gap between Jakarta and Kalimantan, or the additional energy that must be supplied to the newly built capital.

With relocation scheduled to start in 2024, the subsequent years spent developing the new capital will surely intensify the country’s emissions, putting in doubt its ability to meet NDC targets by 2030.

Bappenas has stated that the capital move will require a land area of 600 to 1000 sq km—triple the current size of Jakarta and equivalent to New York City. According to the World Resources Institute, sacrificing this amount of intact forests and peatlands for the new capital could possibly release 48 million tonnes of carbon-dioxide into the environment, comparable to consuming 100 million barrels of oil.

As it stands, the rate of deforestation in Kalimantan is worrying. The Centre for International Forestry Research recorded that between 2000 and 2017, 3.74 million hectares of forest were lost in Kalimantan, mostly to industrial oil palm and pulpwood plantations. In planning to relocate the capital to Kalimantan, the government must therefore carefully assess its greenhouse gas emission status and streamline strategies to keep the NDC targets on track.
How will the new capital meet its energy needs?

According to the national power development plan (RUPTL), Kalimantan will add around 4.6 GW up to 2027, which will be mainly sourced from coal and natural gas.

East Kalimantan’s plan will surely need a major revision to meet the energy demand of the new government district—and if the latter is to live up to President Jokowi’s claim that it will be a modern fossil-free city, especially since the province lacks large-scale hydropower and geothermal potential.

A significant increase in electricity supply will throw Indonesia’s NDC off-track if it is met by coal and gas. The government must go beyond the current development plan and incorporate its emission reduction targets in designing the energy supply for Kalimantan.

For starters, it should disclose a more detailed energy plan and the emissions impact of the relocation, so that targets can be monitored.

It must also learn from Jakarta’s recent blackout and ensure the future capital has a robust electricity network that is able to provide uninterrupted supply. State power company Perusahaan Listrik Negara (PLN) may need to start upgrading the transmission network and improve interconnection of the island’s electricity grid.

The government must find a way to enhance infrastructure while conserving Kalimantan’s forests and peatlands, Indonesia’s carbon sequestration asset.

While solar and hydropower can serve as alternative energy sources, another lower-carbon option is to promote cross-border energy sharing with Malaysia’s Sabah and Sarawak, which are abundant in hydropower.

To successfully relocate its capital without sacrificing its emissions reduction targets, Indonesia must be more ambitious in curbing current and future emissions by introducing more stringent policies, especially in land-use change and energy. Otherwise, Southeast Asia’s largest economy and one of the world’s most biodiverse nations stands to lose more life-sustaining natural capital, even as it gains a new one. (Featured photo credit:  Eco Business)

As a number of ASEAN Member States (AMS) have considered to embark on nuclear energy for power generation as a clean option, the region has been enhancing cooperation in public information/awareness and capacity building. APAEC is the regional blueprint for the energy sector in the framework of the ASEAN Economic Community (AEC) implementation. Being the blueprint of the energy cooperation in the region, APAEC plays a vital role in setting a sustainable future of ASEAN energy landscape. Therefore, it is critical to develop the document with regional consensus in order to have it translated into national policies and plans.

Upon the completion of the Mid-Term Review of the APAEC 2016-2025 Phase I: 2016-2020 that was endorsed by the 36th ASEAN Ministers on Energy Meeting (AMEM, October 2017, Singapore), the ASEAN Energy Ministers tasked the Specialised Energy Bodies (SEBs) and Sub-sector Network (SSNs) to start the development of the APAEC Phase II, facilitated by the ASEAN Centre for Energy. The APAEC Phase II document itself is expected to be endorsed by the ASEAN Member States (AMS) during the 38th AMEM in Vietnam, 2020.

Responding to the rapid change in the energy landscape and to mitigate climate change, the ASEAN representatives shared the same concern on the urgency to have an updated plan in facing various challenges, at national, regional and international levels. To support this process, Beni Suryadi, Manager of the Policy Research and Analytics Programme of ASEAN Centre for Energy (ACE), representing the ASEAN Climate Change and Energy Project (ACCEPT) team presented the Coherent Policy Approach for the development of the APAEC Phase II. In the meeting, Mr Suryadi shared that the Approach developed by ACCEPT will help ASEAN SEBs and SSNs in developing the APAEC Outcome-based Strategies for their respective Programme Areas. The measurement tool that is being developed by ACCEPT will facilitate the designing process of the APAEC Action Plans.

Furthermore, ACCEPT will engage one (1) national expert from each AMS to assist the data gathering and analysis for the Coherent Policy Approach. The progress of the programme will be presented at the 2nd ADC Meeting in May 2019 during 18th Regional Energy Policy and Planning Sub-sector Network Annual Meeting in Singapore. (MRK. Photo credit: EMA)