Long before the Covid-19 pandemic, climate movements had appeared globally and impacted the coal industry. For example, in 2019, a YouTube video titled “Sexy Killers” became a trending topic in Indonesia and damaged the image of coal in the country. The perception of coal as “dirty energy” and moves to phase it out have put the industry in a tough spot.

However, completely phasing out coal would be impractical in the short and medium-term for ensuring energy security in the Association of Southeast Asian Nations (ASEAN), due to growing energy demand. This is expected to increase by an average of 3.4 per cent per year to 1,450 million tons of oil equivalent in 2040. On the other hand, ASEAN coal reserves are abundant, forecast to be about 12–14 billion metric tons in 2035. Therefore, it is sensible to utilise the region’s plentiful coal supply to meet the demand for energy to ensure energy security.

Although coal demand has declined globally, it is projected to increase in ASEAN, from 139 Mtoe in 2017 to 329 Mtoe in 2040. Meanwhile, a fast post-pandemic recovery could result in a significant increase in energy demand. In ASEAN countries, coal accounted for around 89GW of installed power capacity in 2019 and this is expected to almost double by 2040.

However, if compared to the current coal installed capacity in G7 and BRICS countries, ASEAN’s 2040 projected capacity is relatively low, as it is only equal to 43 per cent and 13 per cent respectively. At the same time, the use of coal is a threat to environmental sustainability as it is a carbon-intensive energy source. 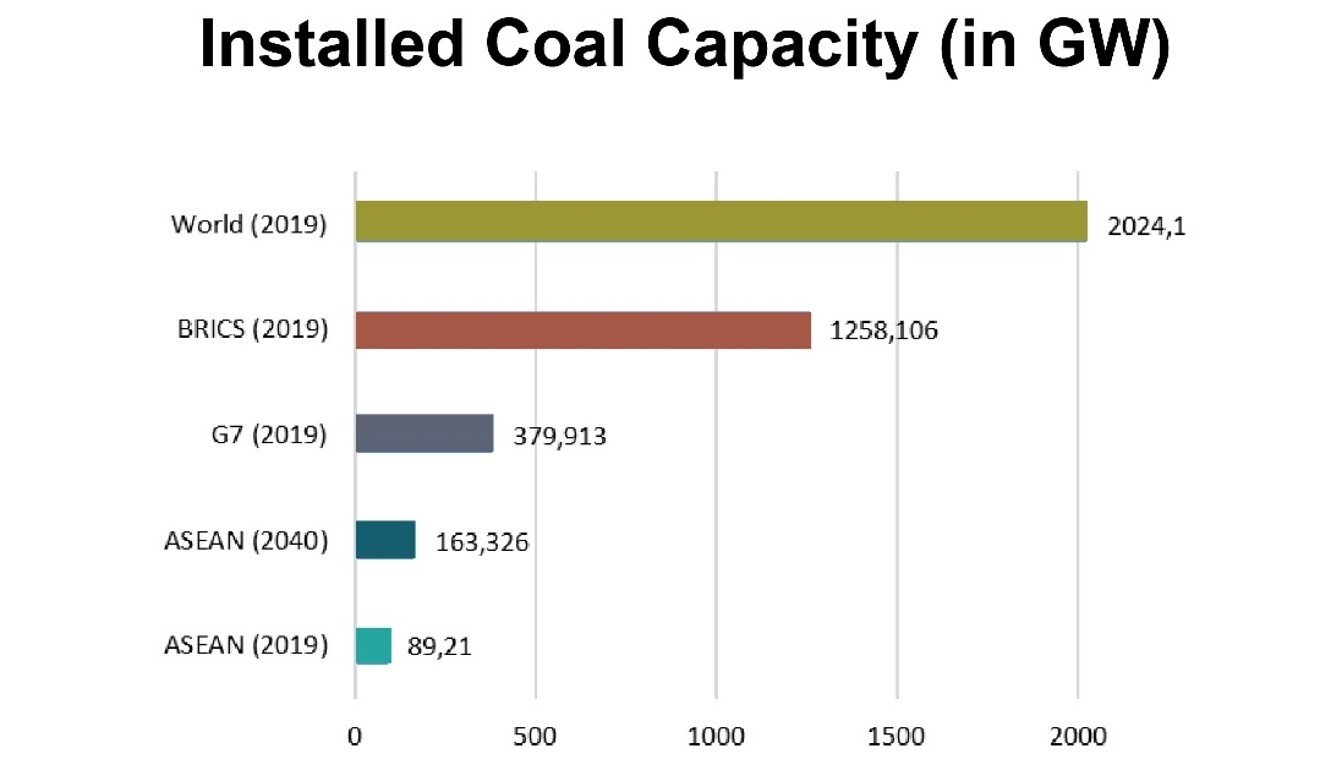 Coal, including from mining, power generation, and other uses, accounts for 40 per cent of global CO2 emissions. Additionally, the International Energy Agency (IEA) reported that CO2 emitted from coal combustion was responsible for over 0.3°C of the 1°C increase in global average annual surface temperatures above pre-industrial levels. This makes coal the single largest source of global temperature increase.

According to an Intergovernmental Panel on Climate Change (IPCCC) report, to achieve the Paris Agreement target of limiting the global temperature increase to 2°C, all sectors would need to reduce CO2 emissions by at least 50 per cent from 2010 levels by 2050. For the coal industry to be around for the next few decades, its main focus would be decarbonisation efforts to reduce emissions.

In power generation, proven Clean Coal Technology (CCT) is available worldwide to further facilitate the transition of coal towards lower emissions. This includes High Efficiency, Low Emissions (HELE) technologies, such as Super Critical (SC) and Ultra-Super Critical (USC), which can reduce CO2 emissions by 8 per cent and 12 per cent respectively, compared to the subcritical. Moreover, there are mixed fuels co-firing with biomass or gas and most importantly, Carbon Capture Utilisation and Storage (CCUS/CCS) which can reduce CO2 emissions up to 90 per cent, such as the Boundary Dam in Canada and Petra Nova in the US.

Shifting and retrofitting ASEAN’s forecast coal capacity in 2035 to 100 per cent USC would reduce cumulative emissions by 1.3 billion tonnes, this is equivalent to installing 25,000 wind turbines or removing 157 million cars from the road.

ASEAN is actively promoting the utilisation of CCT through the establishment of the ASEAN Forum on Coal (AFOC). Currently, out of 89GW of coal fired power plants (CFPP) in ASEAN, 80 per cent are still using subcritical technology. Based on the ASEAN Energy Database System, for the next 20 years, it is projected that there will be an additional capacity of 80GW of supercritical and ultra-supercritical CFPP with around US$95 billion investment needed.

Malaysia has led the way by operating the 1,000MW Manjung 4 plant, which is ASEAN’s first Ultra-Super Critical coal fired power plant. As of 2019, ASEAN had a total installed capacity of 10,021.5MW of HELE CFPP where 53 per cent of them are USC CFPP. This would be a starting point for Asean to further utilise HELE technologies for new or retrofitted CFPP. Indonesia plans to harness the potential of CCS and a pilot project will be implemented in Gundih, making it the first CCS project in ASEAN.
To further advance a higher adoption of clean coal technology, a regulatory framework to mandate newly built and retrofitted coal fired power plants to use advanced technology would be required. Moreover, ASEAN would need to set up more stringent efficiency and emission standards for CFPP to push CCT adoption. Additionally, to further accelerate the utilisation of CCUS, incentives such as carbon pricing and R&D funding support would be fundamental. Moving forward, under the ASEAN Plan of Action for Energy Cooperation, the region is diversifying its energy mix, pursuing energy efficiency efforts, and accelerating the deployment of renewable energy.

ASEAN is advancing energy transition and strengthening energy resilience while at the same time ensuring its energy security. To achieve this, coal must be used more prudently to complement another type of energy.

We should remind ourselves that the use of coal itself is not an act of evil, but it is wrong not to have done anything to mitigate carbon emissions. Coal has been crucial for economic development by providing reliable, flexible, and affordable energy. Experience from projects worldwide and within ASEAN show that clean coal technologies are proven for ASEAN to pursue.

Along with rigorous policy support and enforcement, the transition towards sustainable and low-emission energy can be facilitated. Energy from coal has played an important part in Asean’s development and possibly its post-pandemic recovery.

The big question now is this: Will coal boost the future economy of ASEAN? Or will it sink ASEAN into the abyss of climate catastrophe?