The Role of Smart Cities in Energy Transformation in ASEAN ASEAN Centre for Energy estimated the regional energy demand is expected to grow as much as 2.3 times over long-term projections to 2040, in the Business-as-Usual scenario (BAU). The energy mix in the region continues to rely heavily on fossil fuel, with coal outstripping natural gas as the main source of fossil fuel to meet the demand in the electricity sector by the year 2020, and oil continues as the main source of fuel for the transport sector, accounting for about 45% of total final energy consumption.

Dr Twarath Sutabutr, Inspector-General, Ministry of Energy, Thailand mentioned that cities play a significant role in the energy landscape in the region as almost half of ASEAN’s population is currently living in cities and it was estimated that 90 million more people will move to ASEAN cities by 2030. This will require a significant amount of energy consumption and it should be generated, operated and consumed in a clean and efficient way. He mentioned that in 2018, under Singapore’s chairmanship, ASEAN launched the ASEAN Smart Cities Network (ASCN) which is envisioned as a collaborative platform where cities from the ten ASEAN Member States (AMS) work towards the common goal of smart and sustainable urban development.

To support this initiative, the ASEAN Centre for Energy (ACE) – an intergovernmental organisation within the ASEAN structure that represents the 10 ASEAN Member States’ (AMS) interests in the energy sector – is taking the initiative to work on the energy pillar of the smart city, which is expected to also support the directives of the ASEAN Plan of Action for Energy Cooperation (APAEC) 2016-2025, in particular on renewable energy and energy efficiency.

The electrification of transportation, the closeness to major industries and energy consumption in the buildings are the main factors why cities can be the game-changer when it comes to energy consumption. Digitalization and advancing energy-efficient technologies has provided the opportunity to transform cities to be smarter, greener, and more efficient in the near future.

Smart city concept is nowadays appealing to be adapted by cities around the world to address urban challenges. Oslo of Norway and Copenhagen of Denmark are two leading global examples. Ambassador Morten Høglund, Norway’s Ambassador to ASEAN showed how does Oslo become the electric vehicle capital of the globe and Thomas Capral Henriksen, Head of Energy Cooperation, Embassy of Denmark to Indonesia also shared about Copenhagen that aims to be the First Carbon-Neutral Capital in the World By 2025. Sample at the local or regional is also exist, as shown by 26 cities in the region that grouped under the ASEAN Smart Cities Network.

Building the collaboration between global, regional and local players which involve all range of stakeholders is the key for ASEAN to embark the smart city initiatives, and to that the initiative build by REN21 as mentioned by Hannah E. Murdock, Project Manager & Analyst, Research Direction Team, REN21 as well as the support from U.S. Government in this initiative as mentioned by Katy Clarke, Senior Energy Advisor, U.S. Department of State would be crucial for ASEAN in managing its cities to play the critical role in energy transformation.

As the follow-up, ACE will further communicate with ASCN on the finding from the roundtable and initiate the collaborative project to support the energy pillar of smart cities, as an integrated activity under APAEC 2016-2025. 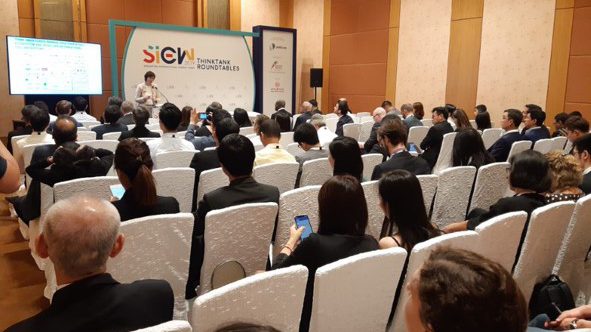 Cover story of the roundtable is also available at SIEW website.