The Role of Natural Gas in ASEAN Energy Security 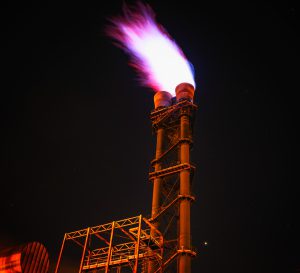 As energy security takes precedence in ASEAN energy agenda, ASEAN governments are seriously looking to explore energy sources that are reliable and sustainable as the main principles of energy cooperation in the region. These principles have been conceptualised under the ASEAN Plan of Action for Energy Cooperation (APAEC) 2016-2025.  In line with this concept, as a low-carbon energy carrier, natural gas has the potential to increase its shares in the ASEAN energy mix. The ASEAN Centre for Energy (ACE) database shows that the share of natural gas in the ASEAN energy mix from 2005 to 2016 has been significant (around 20%).

The region is potentially rich in gas deposits that put the region as a net exporter of natural gas for many years. Two-thirds of ASEAN’s gas reserves are located in Indonesia and Malaysia, with total annual gas production of more than 200 billion cubic metres in 2016. The gas abundance, therefore, has led Indonesia and Malaysia to be among the largest gas exporters in the world. In addition, Brunei Darussalam and Myanmar are also natural gas producers in ASEAN. However, the production level is relatively small with almost 30 billion cubic meters in 2016, of which around 90% of the products were exported. While the level of gas production in those four ASEAN Member States (AMS) set export potential, this is not the case for Thailand. This AMS has become the net importer and expanded its regasification facility to anticipate declining imported pipeline gas supplies. In the case of Singapore, it looks that this country also put some efforts to expand their regasification terminal capacity and to become liquefied natural gas (LNG) trading hub in the region to address the supply and demand issues.

Natural Gas will still be an important pillar of energy supply in the ASEAN region. In 2016, natural gas accounted for 24% of ASEAN energy mix or nearly 150 MTOE, and attributable as the second-largest source of energy after oil. Moreover, natural gas has surpassed coal in ASEAN energy mix in 2005-2016.  Natural gas also plays an increasing role in industrial processes and power sector. In industry, natural gas is not only consumed as a fuel to generate electricity but also as a feedstock of several products such as fertilisers and pharmaceutical products. Natural gas as a feedstock is also commonly used for methanol production, which has many industrial applications. In ASEAN power sector, natural gas has the highest installed capacity with more than one-third of total installed capacity coming from natural gas. These are therefore evident of natural gas significance in ASEAN energy mix.

Looking at the overall energy needs of ASEAN in the next 20 years, it is clear that coal and natural gas will both play a key role in the ASEAN’s energy mix. There are three common reasons for this, the so-called “three As”: abundance, affordability and availability. This does, however, show the potential to help the AMS to achieve both energy security and environmental goals.  It is therefore important for AMS to take into account the benefits of natural gas in framing their long-term energy strategy. 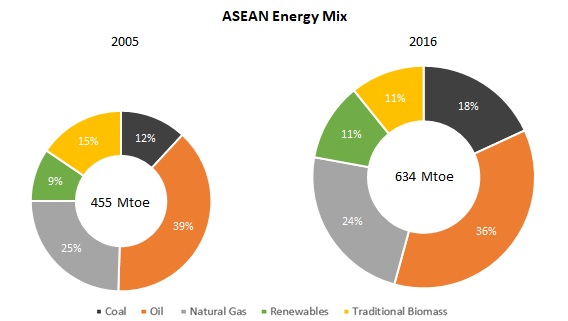 Soaring demand and falling outputs of natural gas have caused anxieties for the AMS in terms of security. The key findings of the 5th ASEAN Energy Outlook (ACE, 2017) projected that ASEAN will no longer be a gas net exporter by around 2025. There are two main reasons for this. Firstly, in terms of production, ASEAN has seen limited discoveries after Natuna Block, which is one of the largest resources in the region. It is evident that natural gas production in ASEAN is decreasing by around 1% annually from 2010 level. Secondly, natural gas consumption keeps increasing in both end-user and power sector. There is an intention in ASEAN to shift fuel consumption from oil to natural gas and renewable energy. The large demand for natural gas from the power sector in the future reflects AMS ambitions in the electrification programme.

As rightly so, it is important for the AMS to realise the full potential of their gas resources. A major challenge is that the gas reserves tend to be located far away from economic activities. Some natural gas resources are dispersed especially in archipelagic countries such as Indonesia and the Philippines. Anticipating this challenge, LNG imports including small-scale LNG supplies could also be part of the alternative solution. In Indonesia, for instance, a natural gas reserve is located near the island of Papua island in eastern Indonesia while the demand is concentrated on the island of Java in western Indonesia. The obvious choice of building small-scale LNG terminal is then crucial to ensure the gas supply. Furthermore, developing gas infrastructure such as pipeline, floating storage regasification unit (FSRU), and small-scale LNG would be extremely helpful for the Member States once the region becomes a gas net importer. Those facilities are important for gas trades within and with other countries outside the region.

Further to increase gas supply, the AMS continue to strengthen regional cooperation in gas supply connectivity. In fact, ASEAN has initiated an interconnecting natural gas pipeline which is known as Trans-ASEAN Gas Pipeline (TAGP). This commitment has been stated in the APAEC document which is planned for 2016-2025 (ACE, 2015). TAGP aims to enhance connectivity for energy security and accessibility via pipelines and regasification terminals. More than 3,500 kilometres of currently existing pipelines have connected six AMS with around 22 million tonnes per annum (MTPA) of six LNG regasification terminals in the region. The TAGP project also provides opportunities for private sector involvement in terms of investment, including financing and technology transfer. Furthermore, the network of gas pipelines offers significant benefits, both in terms of security, flexibility and quality of energy supply.