Paving the way for wind energy prosperity in Vietnam

According to the latest draft of Vietnam’s national Power Development Plan (PDP8), by 2045, the country aspires to reach 151.2 GW of renewable energy in the high load scenario, where solar, onshore wind, and offshore wind make up 36, 28 and 36 per cent of the energy mix respectively. 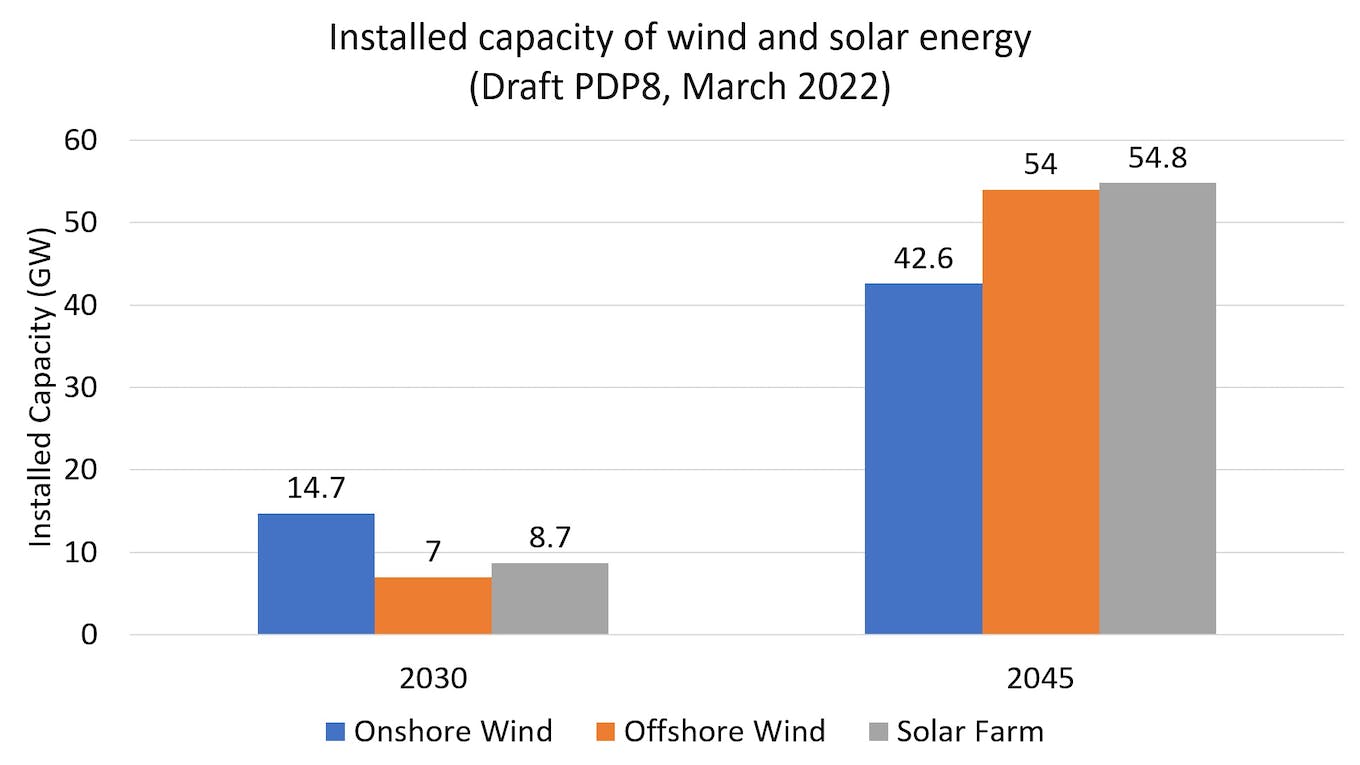 Vietnam wants to massively scale up wind and solar power capacity in the decades ahead. Wind energy will have to rise faster from its currently lower base. [click to enlarge]

The baseload scenario presented in PDP8 states that wind energy will total 21.7 GW by 2030, surpassing solar by 2030. The wind sector has a long way to go to reach there, given only 3.98 GW of wind energy was installed by the end of 2021. In contrast, solar capacity already reached 16.5 GW last year. However, this should not be seen as a setback for wind.

Is wind a promising alternative to solar in Vietnam?

PDP8 clearly indicates that the government is prioritising the development of wind over solar. This could be seen as a reasonable strategy towards the decarbonisation of Vietnam’s electricity sector as wind has immense potential and opportunities to thrive. Vietnam has a coastline of over 3,000 km, with shallow water depths and high consistent wind speeds at an average of over 20 kilometres an hour.

The technical potential of installed wind capacity could reach up to 599 GW, comprising of 261 GW of onshore wind and 338 GW offshore.This prospect is far larger than Southeast Asian peers such as Indonesia, with only 277 GW, and the Philippines, with 178 GW.

Offshore wind would not burden the national grid as much as solar does, because Vietnam’s shallow water areas are closely located to the demand centre. Another co-benefit is that wind sites could boost tourism because the turbines could pique the tourists’ curiosity and they are located on the coastlines of major cities, such as Ho Chi Minh, Da Nang, Ninh Thuan, Binh Thuan and Quang Tri.

Acknowledging the potential and targets, the Vietnamese government has taken prompt action to stimulate the growth of wind energy. In 2018, it updated the supporting mechanism for wind energy projects in Vietnam.

The feed-in-tariff (FIT) – the price at which the state would pay developers for electricity – was proposed at 8.5 US cents/kWh excluding VAT for onshore wind projects and 9.8 cents/kWh for offshore. This tariff is slightly lower than the FIT of solar projects, at 9.35 cents/kWh when first introduced in 2017, especially considering the higher upfront investment of wind projects.

Nevertheless, this scheme has attracted 146 wind projects, of which only 84 met the FIT deadline of commercial operation by 1 November 2021. So far, the approved projects have a total capacity of 3.98 GW.

Many stakeholders such as private developers, associations, and experts have voiced the difficulties of meeting the cut-off date due to Covid-19. They emphasised that FIT is a much-needed incentive for national green recovery. An extension could become the saviour of ‘failed’ projects, which is another half of total registered projects or equivalent to 4.12 GW.

However, the government is adamant with the decision as clarified by Minister of Industry and Trade, Mr Nguyen Hong Dien, at the National Assembly on 9 November 2021. Instead of FIT, the ministry plan to introduce a public-private partnership (PPP) model with a focus on auctions to foster a competitive price.

Unlike solar development, the government is evidently more cautious in introducing policy measures for wind. Measures such as a lower FIT price and not extending the FIT deadline shows that PDP8 is putting special attention on minimising the investment and power loss of transmission lines.

More than 6,600 km of transmission lines have been reduced in the latest draft, equivalent to savings of more than 250,000 billion VND (US$10.8 billion). In addition, long-distance transmission will be restricted, and no new inter-regional line will be constructed from 2030. These strategies drawn from the lessons learned from the solar boom in the past few years, where most of solar electricity generated was curtailed, wasting much of the investment and electricity tariff paid out by EVN.

Both investors and government should come up with reasonable strategies to ensure that the wind energy industry will not enter boom-bust cycles.

From the government’s side, the new PPP policy framework that will replace FIT scheme, is expected to be transparent enough in advising the procedures and selection criteria of the auction mechanism. It also expected to be clear enough in describing coordination and governance, especially in the scope of authority between the national and provincial governments, as well as the sole buyer, EVN.

These traits could help investors in mitigating early project risks that usually comes from the uncertainty of the licensing process. It could also synergise grid and generation planning across regions.

Besides focusing on wind energy development, the diversification of different renewable energy technologies such as biomass should be considered, in addition to continued efforts to invest in grid improvement and energy storage systems, such as, batteries, green hydrogen and pumped hydro storage. Other unexplored strategies like decentralised power systems and regional cooperation through  multilateral power trade – not just multiple bilateral agreements – should also be considered as highlighted in the ASEAN Interconnection Master Plan Study III (AIMS III) and ASEAN Centre for Energy’s recent focus group discussion

For investors and developers, engagement with local partners and provincial governments is essential. While awaiting certainty on the new policy, local organisations could bring valuable know-how on how to approach the government, how to acquire land and how to fulfil other regulatory requirements. Provincial governments hold key roles in allocating land for specific industries and purposes, including power generation. Hence, it is important for developers to align the design of their projects with the government’s plan.

In short, the current PDP8 indicates how committed the government is in decarbonising the power sector. The future for wind energy in Vietnam is relatively promising thanks to geographical and technological advantages; however, the diversification of technology, grid improvement and energy storage systems remain a vital component of Vietnam’s energy transition. They all need significant investments and qualified human resources which could be achieved through solid collaboration at the national and regional level.