The Association of Southeast Asian Nations (ASEAN) is one of the most dynamic and fastest growing regions in the world. Since the declaration of the ASEAN Economic Community (AEC) Blueprint on 20 November 2007—and the formal establishment of the AEC on 31 December 2015—it has contributed significantly to meeting the objectives of reducing the poverty rate, improving the overall well-being of the peoples of ASEAN, narrowing the development gap, strengthening economic development, and expanding both extra- and intra-ASEAN trade and investment.

ASEAN is growing by nearly all metrics. In 2014, the combined gross domestic product (GDP) of the region climbed to US$2.57 trillion, average GDP per capita reached US$4136, and trade reached a record level of US$2.53 trillion. Foreign direct investment (FDI) inflows to the region have also grown steadily over the years to reach US$136.2 billion.1,2

More growth is on the horizon. At the 27th ASEAN Summit on 21 November 2015 in Kuala Lumpur, Malaysia, ASEAN leaders reaffirmed their strong commitment to continue to deepen economic integration over the next 10 years under the ASEAN Economic Community Blueprint 2025.3 With this, the region is projected to grow by at least 4% per year on average over the next five years, but growth could be as high as 6.1%—provided ASEAN moves toward greater integration and that member states continue to implement domestic structural reforms to raise their productivity and competitiveness.4

Increasing energy production and access are key to the realization of the AEC objectives. Although the region’s economy is steadily expanding, its main energy indicators remain substantially under global averages. As of 2013, electricity consumption was 1178 kWh/capita compared to a global average of 2824 kWh/capita, and ultimate primary energy consumption was 0.703 tonnes of oil equivalent (toe)/capita compared to the world average of 1.317 toe/capita. In addition, throughout the ASEAN region about 130 million people still live without electricity access.5

A rapid increase in energy requirements is clearly foreseeable in the ASEAN region. This inevitably will create dual challenges of meeting energy demand while also working to rein in greenhouse gas (GHG) emissions and other potential environmental impacts. Thus, the ASEAN community must now determine how to fuel growth in a sustainable way. Fuel choices have varied over time. There was massive construction of natural gas-fired power plants from 1990–2000 and then growth transitioned as coal-fired power plants were largely built from 2000–2013 by various ASEAN countries. Natural gas and coal constituted 43.8% and 31.5%, respectively, in 2013. Oil-fired power plants lost share in the electricity generation mix, from 42.5% in 1990 to only 4.2% in 2013. During this period of energy growth, ASEAN countries also continued to rely on hydropower, which, together with geothermal and other renewables (e.g., solar PV and wind), contributed 169.3 TWh in 2013, generated from the 45.6 GW of installed renewable energy capacity.

ASEAN reliance on fossil fuels is expected to continue in the future (see Figure 1), especially when future growth trends are considered. With the aggregation of national targets for economic growth of 6.1% on average every year and a population expanding at a growth rate of nearly 1%, the ASEAN Centre for Energy’s 4th ASEAN Energy Outlook forecasted that the TPES will grow by an average of 4.7% per year from 2013 to reach 1685 Mtoe in 2035 under a business-as-usual scenario.6 While efforts are being made both regionally and nationally to implement stronger policies on various energy efficiency and renewable energy targets, the region is expected to continue to rely on fossil fuels to support projected growth. In fact, over the next decade the projected rapid growth in ASEAN electricity consumption will be largely met by coal-fired power generation. Whereas coal only accounted for 20.1% of the primary energy mix in 2013, coal demand is expected grow faster than any other energy source and make up 33% the TPES in 2035, equivalent to 556 Mtoe.

Coal is readily available in ASEAN, underpinned by production in Indonesia, one of the world’s major coal producers and exporters. Thus, coal is the natural choice for the region to fulfill the sharp projected increase in its energy needs. In addition, because ASEAN is a net energy exporter as its production of coal and natural gas substantially outweigh the region’s consumption (even considering crude oil imports), increased coal production in ASEAN will continue to serve regional neighbors and beyond.

Coal-based electricity capacity is projected to increase from about 47 GW in 2013 to 152 GW in 2025 and then to 261 GW in 2035, an average growth rate of 8.1%. New and existing coal capacity are expected to generate 867 TWh in 2025 and 1577 TWh in 2035, replacing natural gas as the fuel providing the largest share of ASEAN electricity generation—coal and natural gas will be responsible for 55% and 32% of electricity generation in 2035, respectively. Electricity from renewables is also expected to increase from 2013 with an average growth rate of 4.4%, making up 13% of TPES in 2035. 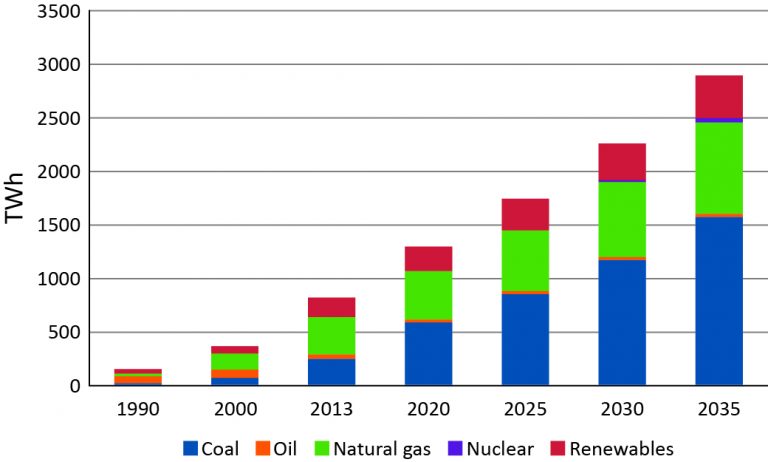 High coal demand is not a new trend in ASEAN as this region has abundant coal resources. Although the current oil price slump has increased the competitiveness of oil, and in some cases natural gas, compared to coal, there is far more uncertainty in oil and natural gas prices. This fact, combined with the large ASEAN coal reserves (forecasted to be about 12–14 billion metric tons in 2035 at the current production rate), makes coal more attractive than other fuel options.6 Notably, while ASEAN has historically been a net exporter of natural gas and coal, an internal study from the ASEAN Council on Petroleum on its Trans-Asian Gas Pipeline Masterplan predicted that ASEAN will see a natural gas supply gap starting around 2017.7 Although there are new prospects in Southeast Asia for natural gas located offshore in deep water or from unconventional production approaches, such natural gas recovery is not currently widely practiced in ASEAN.

Also supporting increased coal-fired power plant deployment is the fact that, throughout the region the infrastructure to generate baseload electricity from coal is already well established, which also contributes to lower prices.

Minimizing CO2 and other emissions from the region will require an increased role for lower-emissions energy. With limited energy resources and also a need to minimize the environmental footprint of ASEAN energy production and utilization, it is vital to adopt all necessary measures to ensure that coal and other fuels are used with the highest efficiency possible. The current and projected growth in coal utilization gives ASEAN an opportunity to deploy the most efficient coal technologies commercially available, reducing the environmental footprint of coal-based electricity generation.

Such HELE technologies paired with carbon capture and storage (CCS) would be an important low-carbon emissions option for ASEAN countries that are building up coal- and natural gas-fired power plant capacity.

Recognizing that barriers to the deployment of low-carbon emissions technologies in the region exist, through a Joint Ministerial Statement at the 32nd ASEAN Ministers on Energy Meeting in September 2014, the ministers voiced support for the ongoing efforts to develop HELE coal-fired power plants.8 They also agreed to generally promote the adoption of clean coal technologies (CCT). Together with the ASEAN+3 Dialogue Partners (China, Japan, and Korea), also meeting in September 2014, ASEAN agreed to step up cooperation on financing and to develop technology cooperation programs; promote policies on CCT, including HELE coal-fired power plants, the upgrading of low-rank coal, CCS, gasification, and liquefaction; and generally develop related industries in the region.9

In the spirit of cooperation that COP21 set into motion, emissions reductions consistent with international climate objectives must be advanced. But for a developing region like ASEAN, environmental protection efforts must be integrated with goals related to energy security, economic development, and poverty alleviation. Thus, ASEAN countries have included HELE coal-based power generation in their Intended Nationally Determined Contributions (INDCs). There is a need for an international mechanism to be established to support both the technical and financial requirements for countries to accelerate the construction of such projects, and to build a pathway for low-emissions coal—and thus a low-emissions energy sector and a better future for ASEAN and the world.

The English version was also published here, and the Mandarin version of the article can be downloaded here

The views, opinions, and information expressed in this article were compiled from sources believed to be reliable for information and sharing purposes only, and are solely those of the writer/s.  They do not necessarily reflect the views and opinions of the ASEAN Centre for Energy (ACE) and/or ASEAN Member States.  Any use of this article’s content should be by ACE’s permission.