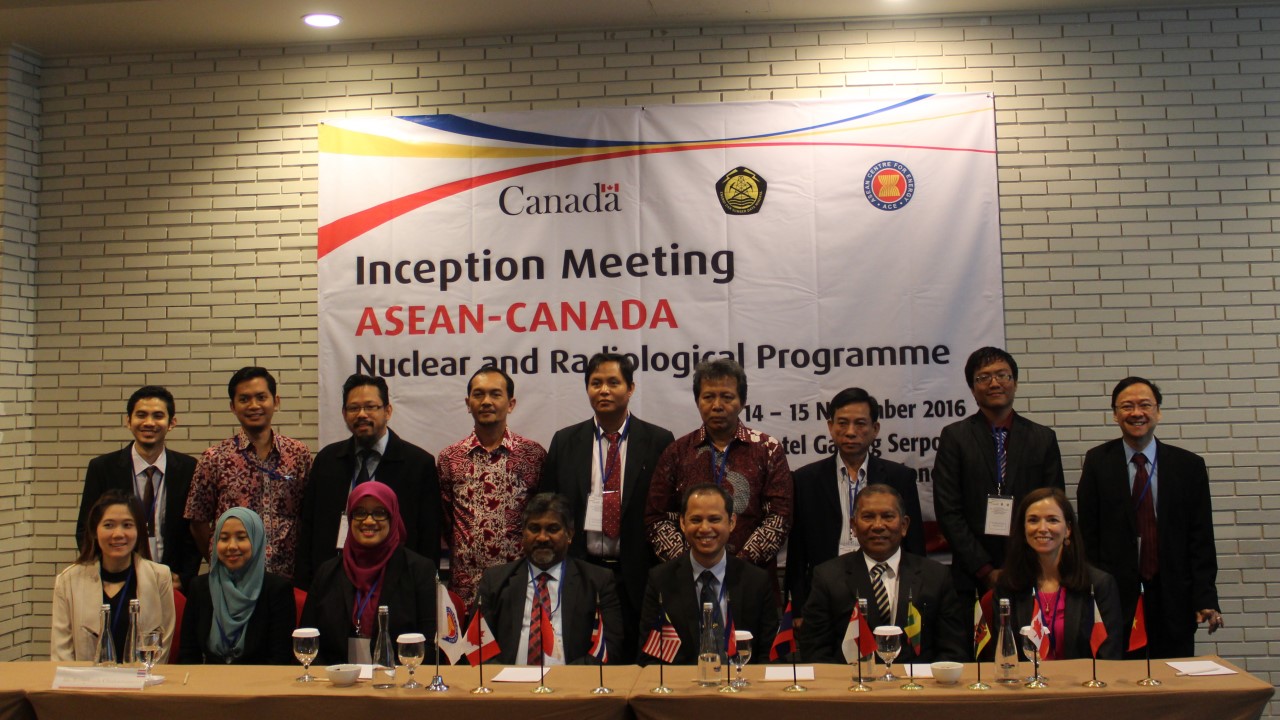 The inception meeting of ASEAN-Canada Nuclear and Radiological Support was held in Tangerang, Indonesia on 14-15 November 2016. The meeting was organised by ASEAN Centre for Energy (ACE) with the support of Department of Foreign Affairs, Trade and Development (DFATD) of Canada – Global Partnership Programme. The Meeting was considered the initial step for the implementation of the agreement between ASEAN and Canada on the development of civilian nuclear energy programme in ASEAN Member States (AMS).

The Meeting was attended by the Canada’s Ambassador to ASEAN, ACE officers, nuclear regional experts and Nuclear Energy Cooperation Sub-sector Network (NEC-SSN)’s focal points from 5 (five) AMS; Cambodia, Indonesia, Lao PDR, Malaysia, and Thailand. The opening remarks were delivered by Mr. Alihudin Sitompul – on behalf of the Indonesian Senior Officials on Energy Leader, Dr. Sanjayan Velautham – Executive Director of ACE, Mr. Fairuz Abdul Halim – on behalf of the ASEAN NEC-SSN Coordinator, and Marie Louise-Hannan – Canada’s Ambassador to ASEAN.  At the meeting, the focal points presented the updates and status related to nuclear programme in their Member States. From their point of view, nuclear energy continued to be viewed as a clean option to meet energy needs.  At the last session, ACE presented the 2-year work plan of nuclear and radiological project and its expected outcomes. The activities will be mainly focused on studies and capacity building related to civilian nuclear power programme development in the AMS, while the expected outcome of the projects will include: (i) development of action plans with respect to capacity building activities, (ii) an inventory of available ASEAN resources related to nuclear power development, and (iii) sharing process of national and regional experiences related to nuclear power development. The participants showed their interest to be involved in the project and provided suggestions and inputs for the implementation. The first study that will be conducted within the project is called “Pre-Feasibility Study on the Establishment of Nuclear Power Plant Programme in ASEAN Member States”. To support the study, related questionnaire was already distributed to be filled by focal points.

As part of the agenda, ACE organised a visit to the G.A. Siwabessy Multipurpose Nuclear Reactor at the National Nuclear Energy Agency, Indonesia (Badan Tenaga Nuklir Nasional/BATAN), to show participants  the research and development of nuclear energy in Indonesia. During the visit, participants learned among others;  the utilisation of multipurpose reactor such as gemstone irradiation and isotope production, nuclear fuel cycle, spent fuel management, and the security of nuclear fuel element in the facility. (RH)